A Practical Guide to Preventing the Threats Associated with Heatwaves

On 16 July, the Red Cross Red Crescent Climate Centre (RCCC) released the ‘Heatwave Guide for Cities’, which serves as a basic introduction and resource for cities to start planning for extreme heat. This guide is intended to help city officials take the first steps to understand the risks associated with heatwaves, develop an early-warning system, work with partners to consolidate heat action plans, and adapt urban-planning practices. It was produced by the Climate Centre in collaboration with more than 25 partner institutions including SouthSouthNorth. 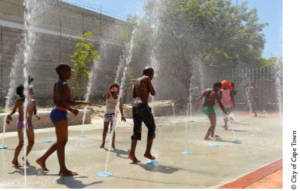 Heatwaves are deadly and their impacts are on the rise globally due to climate change. Every year, they claim the lives of infants, the elderly, and people with chronic health conditions. The urban poor are amongst those most at risk. In addition to threatening the lives and health of vulnerable populations, heatwaves have cascading impacts in other areas of society, such as reduced economic output, strained health systems and rolling power outages. The Lancet estimates that in 2017, 153 billion hours of work were lost due to extreme heat.

The ‘Heatwave Guide for Cities’ recognises that simple, low-cost actions can save lives during episodes of extreme heat. It is designed with and for people working in city government to understand, reduce the risk of, and respond to, heatwaves in their cities. The guide provides information and recommendations for technical staff within city government, on:

Extreme heat is killing people now and will continue to do so at an even higher rate if urgent action is not taken to reduce and adapt to this trend. This guide emphasises that the potential threats can only be prevented if city institutions, community groups, and planners contribute to reducing heat risk now and in the future.