SouthSouthNorth (SSN) came into being in 1999 when Hélène Connor (HELIO International), Emilio La Rovere, (COPPE Federal University of Rio de Janeiro), Steve Thorne, and Stefan Raubenheimer met up during the inter-sessional  Subsidiary Body meeting of the United Nations Framework Convention on Climate Change (UNFCCC) in Bonn, Germany, in late 1999. Steve and Emilio had been commissioned by Helio International to propose a set of criteria and indicators to appraise sustainable development attributes of Clean Development Mechanism projects and present them at a side event at the Climate Change event.

The Clean Development Mechanism (CDM), an article of the 1997 Kyoto Protocol, was at that time under negotiation with modalities and procedures under consideration. The CDM aimed to partner industrialised and developing nations to accredit greenhouse gas emission reductions through projects in the developing world that could be used to offset emissions reduction targets in industrialised countries. Little was known about the rules of the CDM, or how the sustainable development requirement contained in Article 12 of the Kyoto Protocol would be institutionalised, determined or measured.

The four presented a paper setting out a theoretical tool for appraising the sustainable development contribution of potential CDM projects according to a list of criteria and indicators. The tool found support from respondents, some of whom had been invited as potential donors to extend the theoretical to a practical appraisal tool. The Dutch Ministry of Foreign Affairs had been an active supporter of the South African Energy Policy and offered a considerable grant, and with that, a new civil society partnership was founded.

The organisation, named SouthSouthNorth after a climate and development paradigm, brought together institutions dealing with climate change in the Netherlands, France, Brazil, South Africa, Bangladesh and Indonesia to experiment with actual projects in the Southern countries. Stefan, with his background in legal and development facilitation skills, was networked into the climate community and nominated CEO, Prof. Ogunlade Davidson, then co-chair of the Mitigation Working Group Inter-Governmental Panel on Climate Change, as chair of the board. The other co-founders, Steve and Emilio, became the Technical Directors and Hélène became the Director of Monitoring and Evaluation.

Projects were developed in energy efficiency in low-income housing, increased biomass-based power in the paper industry, public transportation, ornamental fishing, communal gardening, indigenous tea propagation, photovoltaic power in low-income housing, waste to power, cultivation of biomass for power production, etc. Amongst the projects was the Kuyasa project, which was the first CDM project to be registered in Africa and the first Gold Standard Project in the world. The projects set the platform for the learning and values of SSN.

By the end of 2008, SSN had diversified and added several new projects to its portfolio. These spanned training, support practice, and facilitation, in the fields of climate and development.

In 2010, SSN successfully bid as part of a consortium for the 5-year, £60m Department for International Development (DFID) and the Netherlands Ministry of Foreign Affairs (MINBUZA) project that became known as the Climate and Development Knowledge Network (CDKN). At about the same time, SSN and the Energy Research Centre (ERC) at the University of Cape Town (UCT) were approached by Kate Hampton of the Children’s Investment Fund Foundation (CIFF), and the Mitigation Action Plans and Scenarios (MAPS) Programme was formed.

As SSN has continued to grow, so has our inventory of projects and partnerships, as we build a reputation for consistently high-quality delivery, and meaningful engagement. Notable among these are Future Climate for Africa (FCFA), the Small Grants Facility (SGF), the Southern Africa Climate Finance Partnership (SACFP), the  Africa LEDS Partnership (AfLP), the  Climate Resilient Infrastructure Development Facility (CRIDF), and Mobilising Investment for NDC Implementation. The varying time-spans and overlapping nature of these projects are a testament to SSN’s principles of flexibility and the connectivity in all our work. Many versions and iterations later, the criteria and indicators remain the basis for the Gold Standard Foundation mitigation, water and land use, and forestry projects. 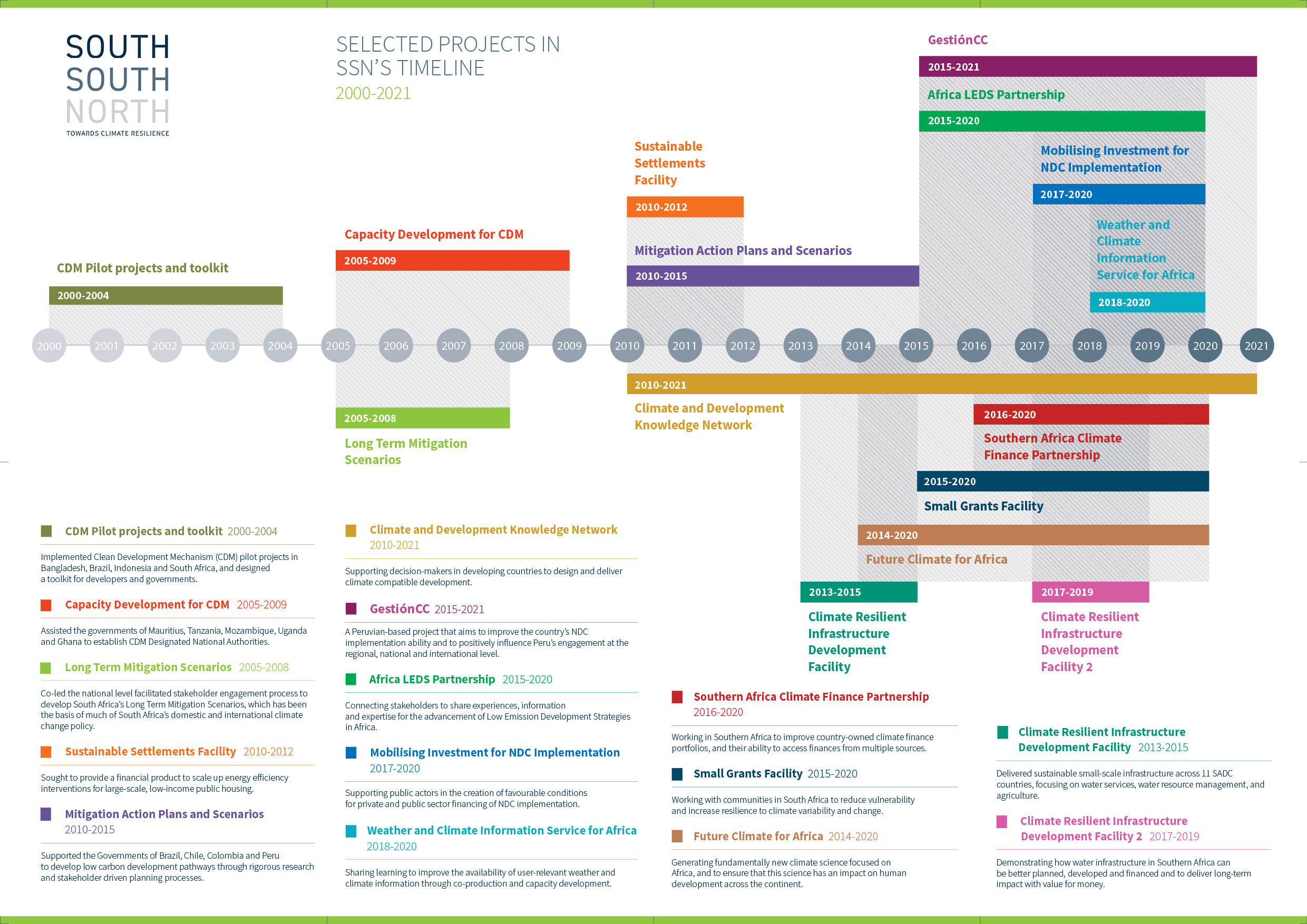 The SSN Group comprises two entities: SSN Non-Profit Company (NPC) and SSN Pty Ltd. The NPC is the primary vehicle for delivering the bulk of SSN’s work. This legal structure gives us the flexibility to collaborate with a variety of partners and entities.

In 2011, SSN converted from a section 21 company to a non-profit company and adopted a new Memorandum of Incorporation (MoI), consistent with the 2008 Companies Act. In accordance with its MoI, SSN NPC’s Directors are accountable to Associates. SSN NPC has Public Benefit Organisation status that entitles it to tax exemptions as stipulated under the (South African) Income Tax Act (Act 58 of 1962 as amended).

SSN Pty Ltd operates as a commercial entity, undertaking consulting and other ‘for-profit’ work that would not fit within the statutory (specifically tax exemption) scope of the NPC. All profits from SSN Pty Ltd are passed on to the NPC as part of its longer-term sustainability plan.

We mobilise capabilities and resources to enable equitable, climate-resilient development.

We facilitate stakeholder engagement by working through existing networks, thereby strengthening relationships. Our knowledge of interrelated processes and policy, and our access to relevant expertise, allows us to work in a flexible and adaptable way.

We believe that effective stewardship of donor funds is key, but in combination with the provision of appropriate alternatives to the traditional consultancy models.