CDKN organised a training for African journalists on the IPCC Special Reports on Land and Oceans at ACRC 2019. One of the journalists, Isaiah Esipisu, shares his thoughts on the session.

The experts pointed this out at the 2019 Africa Climate Risk Conference (ACRC) in Addis Ababa, Ethiopia, while addressing a team of African journalists at an event organised at a session of the conference to discuss the importance of the Intergovernmental Panel on Climate Change (IPCC) reports to Africa. 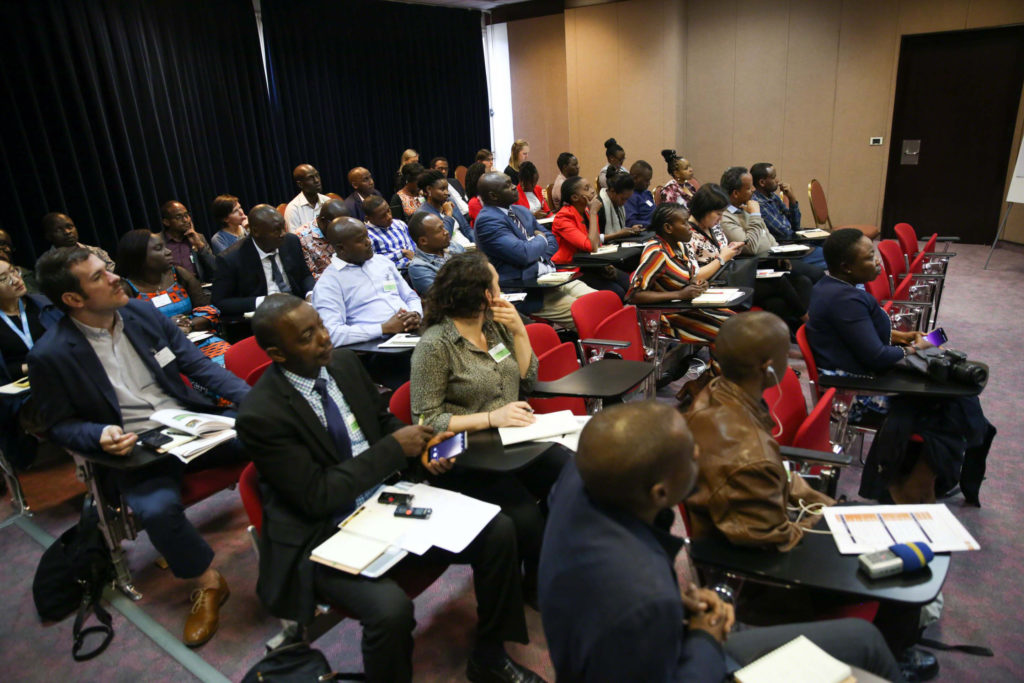 Journalists at the briefing session on the IPCC Special Reports (Photo by IISD/ENB | Kiara Worth).

The training was organised by the Climate and Development Knowledge Network (CDKN). Future Climate for Africa (FCFA) also sponsored several journalists to attend the event.

Dr Tony Knowles and Dr James Kairo who authored the IPCC’s Special Report on Land and Climate Change and the Special Report on Oceans and Cryosphere in a Changing Climate respectively, took the journalists through what the report means for the African continent.

Dr Knowles, the Lead Author of the Report on Land and Climate Change said that land was a critical resource that people rely on for food, water, health and wellbeing, yet, it is already threatened by the growing population pressure and climate change.

“The time to act is now; delayed action will increase the costs of addressing land degradation, and can lead to irreversible biophysical and human outcomes,” said Dr Knowles.

In 2016, the IPCC decided to prepare a special report after member states and observer organisations were asked to submit views on potential themes for special reports during the current Sixth Assessment Report cycle. Nine clusters were considered on different themes, including land, cities, and oceans.

The Special Report on Climate Change and Land represents the second largest cluster and covers seven proposals from member states and observer organisations that related to land.

When it was released in August 2019, the report showed that land is critically important as a source of greenhouse gas emissions and is also a solution to many problems caused by climate change.

According to Dr Knowles, population growth and changes in consumption of food, feed, fibre, timber and energy have caused unprecedented rates of land and freshwater use.

“We, humans, affect more than 70 percent of ice-free land.  A quarter of this land is degraded. The way we produce food and what we eat contributes to the loss of natural ecosystems and declining biodiversity,” said the lead author of the land report.

He noted that whenever land is degraded, it reduces the soil’s ability to take up carbon and this exacerbates climate change. “In turn, climate change exacerbates land degradation in many different ways,” he said.

Today, 500 million people worldwide live in areas that experience desertification, and such people are increasingly negatively affected by climate change.

According to research, desertification and changing climate are projected to cause reductions in crop and livestock productivity, modify the composition of plant species and reduce biological diversity across drylands. Rising carbon dioxide levels will favour more rapid expansion of some invasive plant species in some regions.

So far, drylands cover about 46.2 percent of global land and are home to 3 billion people. Food systems, which include food production and processing, transport, retail, consumption, loss and waste, are currently responsible for up to a third of the global greenhouse gas emissions.

Of the land degradation processes, deforestation, increasing wildfires, degradation of peat soils and permafrost thawing contribute most to climate change through the release of greenhouse gases and the reduction in land carbon sinks.

Dr Kairo, the author of the Special Report on Oceans and Cryosphere in a Changing Climate pointed out that the IPCC special reports are about issues that merit explicit consideration out of the main reports.

“The special reports are designed to address policy relevant issues that may require input from a wide range of disciplines,” said Dr Kairo.

He said that the world’s ocean and cryosphere have been ‘taking the heat’ from climate change for decades. “Consequences for nature and humanity are sweeping and severe,” he said.

He noted that smaller glaciers found, for example, in Europe, eastern Africa, the tropical Andes and Indonesia are projected to lose more than 80 percent of their current ice mass by 2100 if emissions continue to increase strongly.

Mairi Dupar, the facilitator of the session and the CDKN Technical Advisor and Managing Editor at the Overseas Development Institute (ODI) emphasised the critical role played by journalists in disseminating climate change related information.

“CDKN will continue supporting journalists to ensure that they communicate climate science information to the relevant consumers for social and political development on the continent,” said Mairi.

The African Climate Risks Conference was organised by FCFA with funding from UKAid and NERC.

The conference runs from the 7 October until 9 October at the United Nations Conference Centre in Addis Ababa, Ethiopia.

This article was written by Isaiah Esipisu from the Pan-African Media Alliance for Climate Change.