Mozambique – climate shocks and the case for climate resilient infrastructure

In recent years, Mozambique has borne the brunt of the devastating effects that climate change has on livelihoods. 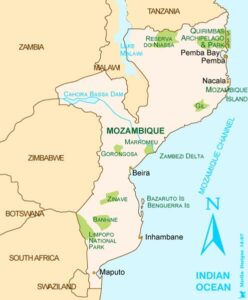 Mozambique is a developing country situated on the south-eastern coast of Africa (see the map to the right), with an estimated population of 31 million people. It has a substantial (2,500 km long) coastline on the Indian Ocean along its entire eastern flank. While this topographical attribute may present access to coastal resources and opportunities, it is also a source of vulnerability.

Mozambique, with its sub-tropical climate and coastal lowlands, boasts several pristine, palm-fronted beaches. This makes it a popular tourist destination, and the country offers a range of recreational water activities, such as world-class diving and snorkelling opportunities among the coral reefs of the Bazaruto and Quirimbas archipelagos and small coastal towns. In addition to its thriving tourism industry, Mozambique’s coastline provides access to fishing opportunities for local communities. Roughly 85% of Mozambique’s annual catch is produced by artisanal fishers.

Despite these seemingly sanguine natural attributes that support livelihoods for local communities on one hand, and provide enjoyment for marine enthusiasts on the other, the barrage of climate shocks inundating the country has exacted a heavy toll on livelihoods and biodiversity.

From severe droughts over the past 6 years to consecutive tropical cyclones, Mozambique continues to experience debilitating climate shocks.

Cyclone ‘Dineo’ in 2017 disrupted over 750,000 lives, while cyclones ‘Idai’ (2019) and ‘Kenneth’ (2019) affected close to two million inhabitants. Cyclone ‘Eloise’ (2021) saw close to 500,000 lives impacted. The calamitous toll on entire communities goes beyond displacement in the immediate aftermath of the cyclones. Critical infrastructure such as bridges and roads are washed away, water systems are compromised and crop fields are flooded, exacerbating food insecurity. Health centres and schools are also often damaged and, in some cases, permanently destroyed.

The latest metrological event affecting Mozambique is the tropical storm, Ana, which struck in January 2022 with unrelenting ferocity. According to the United Nations Office for the Coordination of Humanitarian Affairs (UNOCHA), Ana has adversely affected over 140,000 lives, mostly in Mozambique’s north and north-western regions. The storm also swept through Madagascar, to Mozambique’s east, and spilled over into neighbouring countries to the west, including Malawi and Zambia.

These extreme weather events have affected the lives of close to 20 million inhabitants (see graph below) and have occurred with increasing frequency over the past two decades. This confirms that, especially in Mozambique’s case, the devastating effects of climate change are no longer a threat but a lived reality. 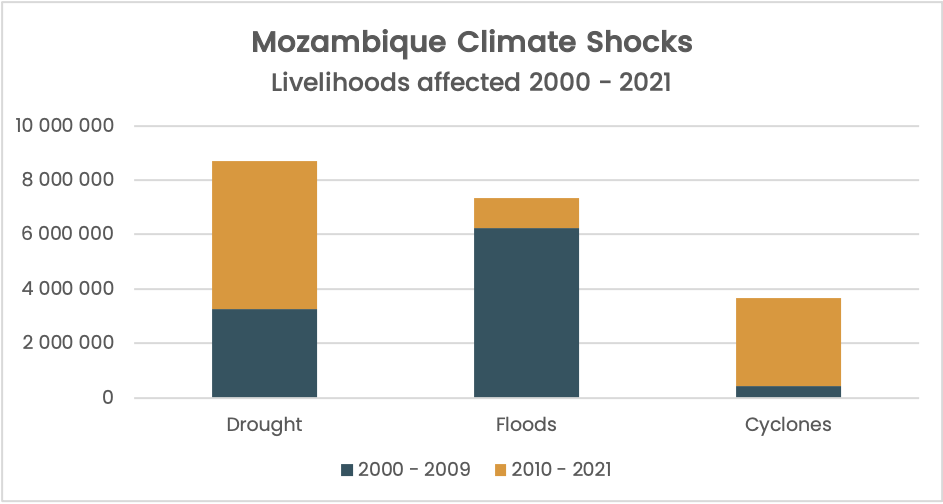 To counter the destruction wrought by the consecutive extreme weather events, several multilateral institutions have offered much need support and relief. For instance, in 2021 the African Development Bank (AfDB) assisted with the purchase of 26 modular steel bridges (see photo below) to replace destroyed infrastructure and to re-establish critical transport links. These bridges can be erected quickly (within months) and are meant to provide a temporary solution to a long-term problem. With an expected lifespan of 100 years, the bridges will benefit up to 500,000 people.

It could be argued that climate resilient infrastructure solutions like these should increasingly feature as part of regular development plans rather than as emergency-only recovery solutions, especially in highly climate vulnerable areas. In the future, such a re-orientation may see concessional financial flows (such as the World Bank’s USD 130 million ‘Mozambique: Cyclone Idai & Kenneth Emergency Recovery and Resilience Project’) replaced by mainstream financial flows that occur before, rather than after, significant climate events.

Article 2.1(c) of the Paris Agreement calls for exactly this in its pronouncement of “Making finance flows consistent with a pathway towards low greenhouse gas emissions and climate-resilient development.”

SouthSouthNorth’s (SSN’s) Aligning Financial Flows with the Paris Agreement in Africa (AFF) programme aims to assist African countries, such as Mozambique, in strategically redirecting their financial flows to prepare for and minimise future climate change impacts.

For example, one of AFF’s programme objectives is to conduct research that will elucidate how Mozambique can build its resilience against climatic disasters, such as those discussed in this post. In an upcoming blog post, we will highlight another challenge that Mozambique is facing and will be addressed in AFF’s research, namely: What to consider when carbon-based energy assets lose their economic lustre in light of climate change considerations.

AFF’s research will be discussed and validated by experts, decision-makers and practitioners to ensure that the research outcomes are relevant and actionable. Learnings from Mozambique will also be shared with other African countries that experience similar challenges to ensure knowledge-sharing throughout the programme. Other countries that have been identified with similar challenges to Mozambique, and have therefore been added to AFF’s “Cluster 2” countries, are: Democratic Republic of the Congo, Kenya, Tanzania and Uganda.

All of AFF’s findings on the Cluster 2 countries will be written up in a comprehensive paper, which can then be referenced by policymakers to ensure that an enabling environment is created where financial flows can be redirected to:

The AFF programme falls under the auspices of the International Climate Initiative (IKI) funding window of the German Federal Ministry for the Environment, Nature Conservation and Nuclear Safety (BMU).