OPINION: Why I believe climate change researchers should contribute to Wikipedia

When you search for “climate change adaptation” in Google, the Wikipedia page on the topic appears in the top 3 search results. Wikipedia ranks the importance of the page “high”, namely that it is about “well-known issues”. However, when your browser opens the page, the first thing the viewer sees is an alert box highlighting that the article has issues. In terms of quality and completeness, the page is rated “C”, meaning that “considerable editing is needed to close gaps in information”.

As someone who conducts research on climate change adaptation, it was a privilege to take part in Africa’s first Wikipedia edit-a-thon and work with colleagues from across the continent to address some of these gaps. Over 3 days in Cape Town, we added a new section on adaptation in Africa (with sub-sections on northern, western, eastern and southern Africa); and also created a new section on adaptation policy, which we populated with examples from across the continent. We also added a significant number of Africa-relevant sources to the external links section, which previously only included geographically-specific pointers to north American and European examples.

For researchers, communicating scientific findings in written format is not new. Postgraduate degrees are awarded on the basis of dissertations or theses, and publishing papers in journals to document results are a key component of recognition and career progression. But the audience for this writing is largely peers in academia and the scientific community. Despite growing interest in communicating research findings through new platforms, Wikipedia is rarely considered as a platform for impact. 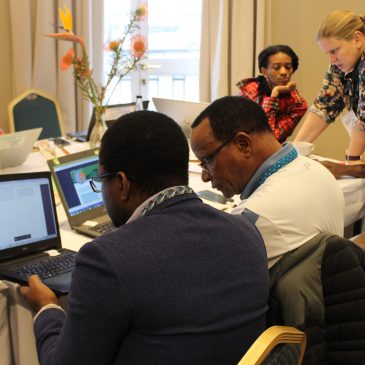 It is a pity that Wikipedia is often overlooked. As one of the world’s most popular websites it provides a medium for communication beyond just the scientific audience. The climate change adaptation page, for example, receives on average 6000 hits per month. Communication between research and policy and practice is critical for addressing climate change. Known as a wicked problem that defies simple resolution – where climate change is concerned, stakes are high, facts are uncertain, and decisions are urgent.

Addressing climate change cannot be achieved by either the scientific or the policy communities alone – instead it requires dialogue. As someone who also works with policy-makers and practitioners, I also know how much demand there is for climate change information that is accessible – both in term of not hiding behind a journal’s pay wall, and also in terms of a communication style that can be understood by non-experts. With its significant reach, Wikipedia is a key platform.

Listening to some of the discussions during the edit-a-thon, it is important to recognise that it is not automatically easy for researchers to contribute to Wikipedia. Having spent many years honing skills in scientific writing, and often researching a niche area within the broad climate change field, it takes practice to write in an accessible style that gives an overview of a topic to an interested non-specialist.

Wikipedia has its own set of principles (or pillars) for contributors that are in-keeping with its ethos of making knowledge accessible to all. These pillars address the need for neutral language in developing encyclopedia-style entries, and respecting diversity. In addition to this, the participants at the Africa Wikipedia edit-a-thon on climate change created their own principles, among them using gender-neutral language, promoting African research, and prioritising open source citations.

Wikipedia is a living resource – never “finished” – and we left the edit-a-thon with plans to further edit, restructure and add content to various climate change-related topics. However, for the 6000 monthly visitors to the page, we are confident that they will now get a more complete picture of what climate change adaptation means in the African context. And since those visitors are likely to include people who need to be involved in addressing climate change, this hopefully contributes to our chances at climate-resilient futures.