Scaling Up Clean Cooking in Kenya

Kenya is one of the focus countries for the International Climate Initiative programme entitled ‘Mobilising Investment for NDC Implementation’ (referred to as IKI MI) which is being managed by SouthSouthNorth. The programme aims to support seven developing countries across Africa, Latin America, the Caribbean and Asia to meet their commitments to the Paris Agreement. The sub-Saharan African countries in the programme are Ethiopia and Kenya.

In a scoping study in Kenya, we identified bioethanol for clean cooking as a subsector with significant potential for impact. The majority of the poor in Kenya cook on what is known as ‘dirty fuels’ which include firewood, charcoal and kerosene. These fuels are a major contributor to respiratory diseases from indoor air pollution, carbon emissions, and deforestation. Bioethanol and liquefied petroleum gas (LPG) are clean alternatives to traditional fuels and switching to these resources aligns with Kenya’s environmental policy. LPG is generally well-understood and is being actively promoted by the government. However, it remains expensive for the urban poor. Bioethanol offers an alternative and can be complementary to LPG as a clean cooking fuel for the bottom end of the market. The policy environment supports the move towards clean cooking with initiatives like the ‘Kerosene Free Kenya’ campaign, efforts to regulate the charcoal industry and Vision 2030 which promotes the transformation of Kenya into a newly-industrializing, middle-income country which strives to provide a high quality of life for all.

Addressing the dirty cooking fuel challenge with a cleaner substitute from bioethanol in an affordable manner has huge implications for the region. Wood, charcoal and kerosene are the primary energy sources for cooking and heating in Africa, and are used by the vast majority of the population. On burning, they emit particles and this indoor air pollution is responsible for Domestically Acquired Particulate Lung Disease (DAPLD) or “Hut Lung” which can result in a debilitating respiratory disease. It particularly affects women and children and results in significant morbidity and mortality amongst the population of sub-Saharan Africa. The World Bank reports that globally 2.9 billion people, most of whom are women, use dirty cooking fuels and this is responsible for 4 million deaths every year.

Dirty cooking fuels also have a vast environmental impact as they contribute to deforestation, forest degradation and the release of carbon emissions. For a country like Kenya, there are huge benefits to be realised by transitioning to clean cooking fuels like LPG and bioethanol. Bioethanol is an alcohol fuel that can be distilled from a variety of biomass feedstocks of which sugar cane and molasses are the most important. In Kenya, bioethanol has the potential to be the cheapest cooking fuel on the market. It is encouraging to note that the analysis and rationale in the triple bottom-line study that we commissioned from Dalberg in Nairobi, helped to support the argument to the Kenyan Government to move to zero-rated VAT for bioethanol in the June 2019 Budget. 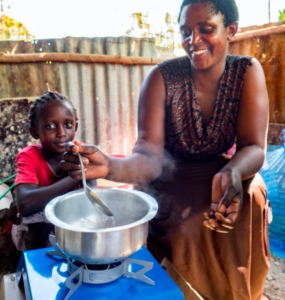 Apart from the use of ethanol as a clean cooking resource, it can also be blended with petroleum for use as a transport fuel in many countries. All gasoline sold in Brazil, the world’s second largest ethanol producer, includes a blend of 18 to 27.5 percent of the resource. All light vehicles therefore run on this petroleum-ethanol blend. Apparently it takes a small adjustment to convert a normal internal combustion engine to a flexible fuel engine that can run on any proportion of gasoline and ethanol. The Kenyan government has authorized the use of E10, a 10% ethanol-gasoline blend, and has a corresponding mandate in place for Kisumu. However, according to reports, this cannot be implemented due to a lack of local ethanol supplies.

The development of the local Kenyan ethanol industry represents an opportunity for local production which could stimulate a supply chain, create jobs, help to build a manufacturing base and attract foreign investment. Currently, Kenya struggles to produce ethanol at a competitive price and the local sugar industry, the most important source of ethanol feedstock, is, by all accounts, in trouble. Additional revenue derived from a growing bioethanol industry may help to build a competitive local sugar industry which, in itself, is responsible for millions of agricultural livelihoods.

The research report we commissioned from Dalberg on cooking fuels in Kenya calculated that in Nairobi, a transition of all kerosene/charcoal users to bioethanol would contribute 10% towards Kenya’s 2030 greenhouse gas reduction goal. This would be a significant triumph for climate action. The IKI MI programme is working to achieve this by supporting the private sector who are innovating in this space. The programme has also recently funded a social media campaign against dirty cooking fuels, which was launched earlier this year, which we hope will raise awareness to drive the necessary behavioural change.

The current focus of the programme is the development of a masterplan on upstream production and will model the current gap in local production. Out of this study will come a set of policy and investment recommendations required to grow the industry. SouthSouthNorth aims to present investment opportunities to the Sugar and Ethanol Africa Conference on the 17th of September in Nairobi.