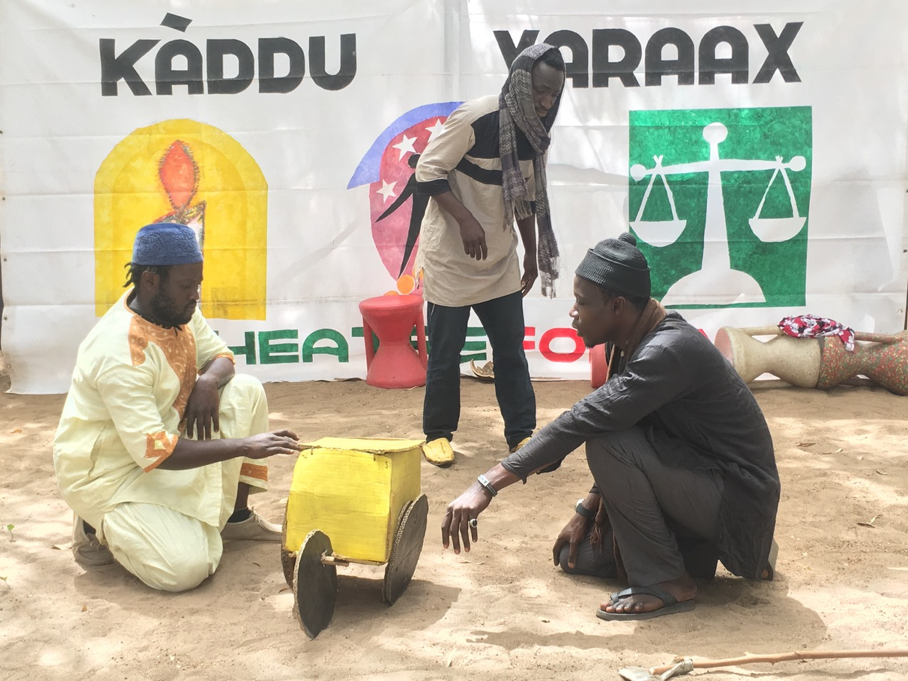 Actors from a Dakar-based theatre group take on different characters in a play that grapples with changing farming conditions in Senegal as the climate becomes hotter and drier (Source: Dr Adeline Barnaud).

Fatick is in the heart of the peanut basin in Senegal, about 130km south-east of the capital, Dakar. The town perches on the edge of one of the many thin green tributaries that snake down from the desert and feed into the Saloum River which spills out into the Atlantic Ocean at a massive delta on the coast.

The future of crop production in this peanut and cereal-growing country is uncertain, as the western Sahel is expected to get hotter and drier, particularly in the pre-monsoon months, according to climate modellers. But what do the farmers here at the coalface of agriculture need, in order to respond to these shifting climatic patterns and farming conditions? How do these needs align with what development funders, or scientists, or local elected officials think the region needs in terms of support to help them adapt to a changing climate?

A troupe of Senegalese actors is working with climate researchers to test out a novel approach to sharing and using climate information amongst farmers and other key players in the agricultural sector there, to see how potentially diverging needs and agendas can be aligned to help the community better gear up for farming in Senegal’s increasingly desert-like conditions.

The theatre piece, co-produced by climate researchers and various development organisations along with the Dakar-based Kaddu Yaraax Theatre Company, is set in the year 2050: a television journalist is filming a documentary on the collapse of agriculture in the region and the resulting rise in hunger, linked with the extreme climate. He visits a piece of land that is typical of Senegal’s cereal producing farmland, where crops like pearl millet, sorghum, and peanuts were traditionally grown. The land has turned to desert and is producing almost nothing. He visits the site with a small crowd of concerned people who are all somehow involved in farming: someone from a funding agency whose organisation was driving innovation in agriculture; a regional decision-maker; a climate scientist; an agronomist; a farmer involved with research projects.

The journalist looks back at the history of agriculture planning from three decades earlier, when these stakeholders could have chosen to put their energy into boosting soil fertility on this piece of land, or experimenting with new seed varieties. But by 2050, it’s clear that their approaches didn’t work. The desert has spread, crop yields are down, and hunger is widespread. What should they have done differently; the journalist asks each of the characters, to avoid this outcome?

At face value, the theatre production may look like it’s just an educational piece to alert the community to the threat of changing climate to cereal farming here.

Although as Dr Adeline Barnaud from the Institute of Research for Development (IRD) at Montpellier in southern France explains, there’s another reason for putting on the production. It is to start a conversation with the audience members.

Barnaud is a plant geneticist working with the African Monsoon Multidisciplinary Analysis 2050 (AMMA-2050) part of Future Climate for Africa (FCFA), a cross-disciplinary team of African and European researchers whose collaboration aims to support decision-makers in the Sahel region of West Africa to integrate scientific knowledge relating to climate into regional decision-making.

This theatre production is targeted at specific audiences, people who are involved in agricultural planning in the region, and the process is geared towards starting a conversation with the audience in order to understand their perspectives and needs in this sector.

‘We held the theatre production on four occasions in different parts of Senegal,’ explains Barnaud, ‘one performance was for researchers within our research group, other performances were for Senegalese researchers, for local and regional decision-makers, and for civil society.’

Each of the theatre troupe’s actors take on the character of a different role player in the farming story. Once the play is done, facilitators start a discussion with the audience, to see how they identified with the storyline and the issues addressed in it.

‘This kind of participatory theatre forum is a tool for co-producing knowledge for climate-adaptation responses in the agriculture sector,’ says Barnaud. ‘It is specifically designed to address the different power dynamics between the various stakeholders that the characters represent. This process is a way to break down barriers so that people can explore different perspectives and experiences that these kinds of characters might face in the context of climate change. What are the common interests, or the conflicting agendas and ambitions of, for instance, the scientists, the government officials, policy makers, and farmers? These are all issues which can impact on their decisions on how to adapt to future agricultural conditions.’

Each performance and the audience feedback was captured on film, so that Barnaud’s team can use this as a tool to help spread tailored climate information within the agricultural sector in the region. 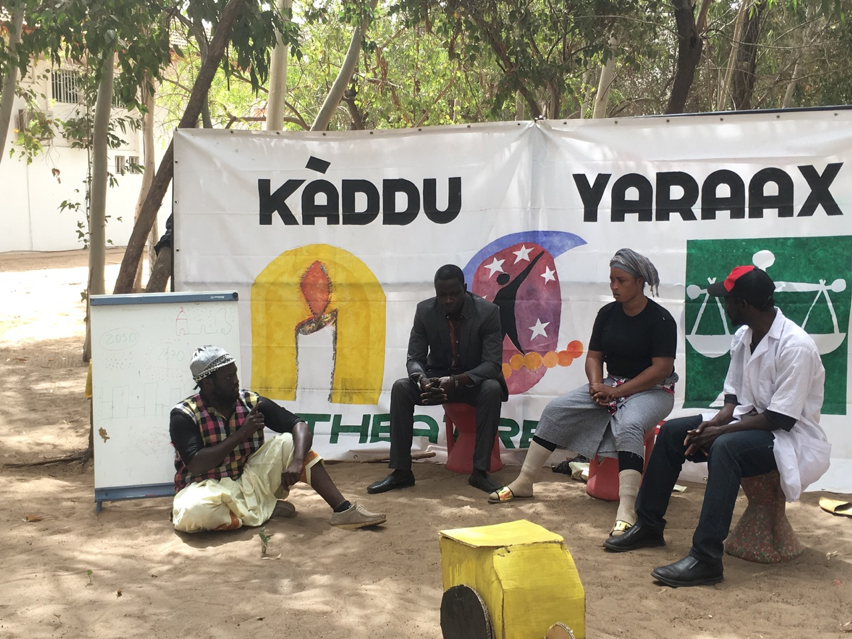 Future Climate for Africa (FCFA) is a cross-disciplinary, multi-country research and development partnership that aims to generate fundamentally new climate science focused on Africa, and to ensure that this science has an impact on human development across the continent. The work reported on in this story is part of the AMMA-2050 (African Monsoon Multi-disciplinary Analysis 2050) research project, which aims to support decision-makers in West Africa to integrate this knowledge into climate-sensitive decisions.

This article was written by Leonie Joubert and was originally posted on the Future Climate for Africa (FCFA) website.