Innovative partnerships that invite all voices result in solutions for climate adaptation that vulnerable communities want and need. 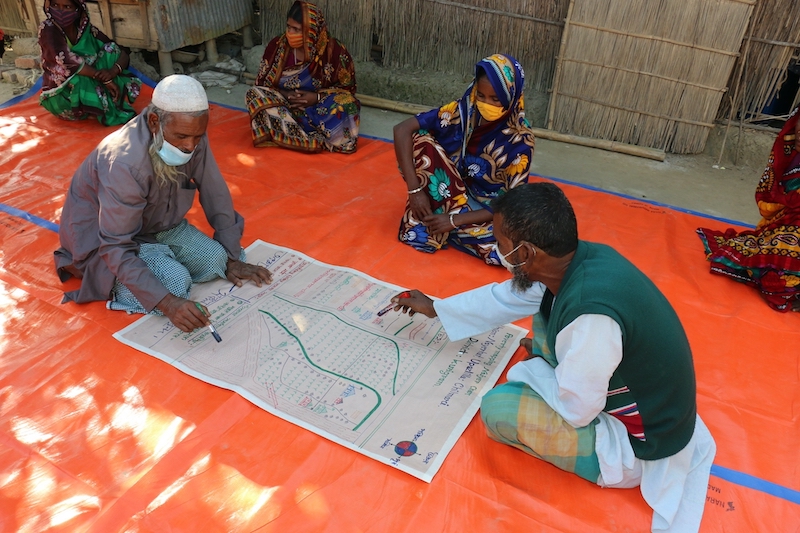 From the refugees in the Bay of Bengal to the residents of Nairobi’s slums, the impacts of climate change are becoming increasingly visible. So too is the capacity for these communities to play a role in co-developing innovative solutions for adaptation.

“Action research for climate adaptation must be built on a foundation of inclusion, where many voices contribute to identifying, testing and implementing solutions that meet the needs of the most vulnerable,” says Professor Saleemul Huq, member of the Adaptation Research Alliance (ARA) and Director of the International Centre for Climate Change and Development (ICCCAD).

This collaborative approach should be the core of adaptation research and is championed by the ARA through its Results-Oriented Action Research (ROAR) Principles.

Six guidelines that link knowledge with action, the principles were co-developed by the ARA’s international network to enable a future where climate adaptation research is demand-driven, evidence-based and co-produced.

“If researchers are enabled and supported to engage as partners with policymakers, practitioners and communities, it can drive innovative solutions that communities want and need,” says ARA Co-Chair Anand Patwardhan, Professor of Public Policy at the University of Maryland.

Over 4 million people in Bangladesh are at risk of flooding, food insecurity and disease as a result of climate change. In the Bay of Bengal, where the various chars, or river islands, are home to hundreds of thousands of climate migrants, the situation is most dire.

A single family on the chars can move up to 40 times in one year, with cyclones, flash floods and erosion repeatedly destroying homes, schools and farmland.

Farms on the char islands are frequently affected by climate change due to their proximity to the river and the people’s heavy reliance on agriculture for their livelihoods, says research in the Land Use Policy journal.

“As adaptation is location specific, it is very important to understand and document char farmers’ perceptions, vulnerability, and local strategies to adapt agricultural practices toward resilience to environmental change,” it says.

Acknowledging the vulnerability, the government of Bangladesh has made climate adaptation a priority in its strategic planning. Implementing its policies, however, requires a link between government decision-makers and community level actors.

“No policy for climate adaptation can be implemented correctly if all the living conditions and values are not considered and if the people living in the communities don’t understand the benefits,” Stéphane Van Haute, manager of Climate Action and Communications at Friendship NGO, said during the 15th International Conference on Community-Based Adaptation to Climate Change (CBA15).

Through their Community Initiated Disaster Risk Reduction (CIDRR) approach, Friendship brings together community leaders, government officials and experts and researchers to collaborate on climate actions. Meeting each month, the group identifies problems and proposes solutions that are collectively agreed upon.

Through the CIDRR training and capacity building, indigenous knowledge is blended with modern concepts to create solutions that locals can use. “They gave us training on how to grow corn and nuts. This is how we are living,” says char climate migrant, Salam Mollah.

Including the voice of the voiceless in adaptation actions ensures buy-in for solutions that can later be scaled-up. “Communities are empowered to have a say in the decision-making processes and to play a role in supporting their communities and livelihoods while increasing government awareness of the needs and capacity of remote communities,” Van Haute said.

“Taken together this allows improvement of national climate adaptation plans and their implementation on a local level.”

Collaborative knowledge production is also playing a role in redeveloping Nairobi’s settlements to meet the needs of a changing climate. This is exactly how Muungano wa Wanavijiji, a social movement of slum residents and urban poor in Kenya, envisions a new future for Mukuru.

A sprawling township with over 100,000 households, Mukuru is one of the biggest informal settlements in Nairobi and among the largest in Africa. Tightly packed and teeming with life, more than 90% of Mukuru’s residents live in corrugated iron shacks. These makeshift homes hold an average of three people, with no formal water or sanitation available.

Heatwaves in Nairobi are expected to become more frequent due to climate change, exacerbating the already high temperatures of the cramped settlement, according to an International Institute for Environment and Development (IIED) report. Flooding is also a risk, due to Mukuru’s location along the Ngong River where overflows carry disease, destruction and sewage.

Upgrading informal settlements can lead to climate-resilient development but is marked by a history of failure. “Policy and planning interventions in Kenya and other parts of the world remain incapable of resolving problems in such settlements at scale,” says a University of Manchester case study of Mukuru. “This is often the case for strategic planning processes that fail to consider the views of low-income residents.”

But Muungano is changing that with an alliance of partners facilitating a community-driven process of redevelopment in Mukuru. After securing the government’s commitment to upgrade, Muungano mobilised sweeping engagement in the form of eight consortia, with 42 organisations representing academia, government, private sector and civil society.

Among the collective’s proposed development plans are structured waste management and recycling facilities to reduce flood-induced risks from the direct and indirect impacts of climate change. Also, the provision of green spaces and cooler housing designs to address heatwave impacts. Planned pedestrian and cycling provisions, along with solar-powered street lighting, aim to enable greenhouse gas reductions.

“The work we’ve done is all evidence-based,” said Jane Weru, executive director of Muungano partner Akiba Mashinani Trust, during CBA15. “The proposals we made were all based on research carried out by formal researchers and the people of Mukuru who were trained to do the data collection.”

The result is a development agenda that meets the needs of the local community and lays the groundwork for strengthening climate resilience in informal settlements beyond Mukuru.

“Without collaboration between formal researchers and practitioners, we won’t be able to crack the nut that is the challenge of climate change,” said Weru.

These case studies, and many more from across the ARA’s global membership, highlight the impacts possible through research that follows ROAR Principles. Designed by the ARA network, they not only provide a framework for collaboration where all actors involved in climate adaptation have a voice, but give a glimpse into a new future for finding solutions that work.

“These principles instigate a systemic change in action research, one where the needs of the most vulnerable are front and centre and where we co-produce solutions that make a difference,” says Patwardhan.

Return to the ARA webpage